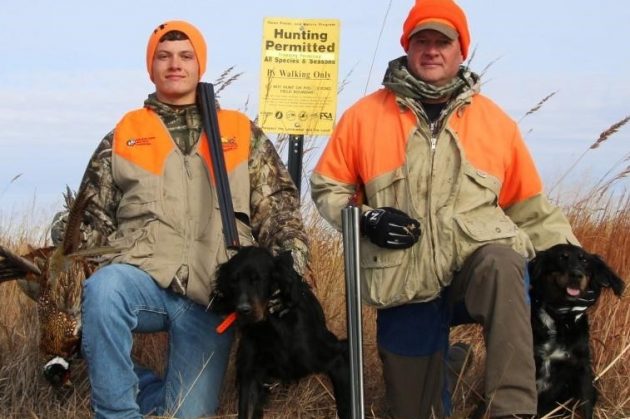 “As a landowner, farmer and hunter, ‘The Habitat Organization’ has been a passion of mine ever since being introduced to its grassroots model many years ago,” commented Jerrod Burke. “I’ve worked with Pheasants Forever to attain diverse habitat projects on our family farm and to profile some of the great public lands we have in the state of Nebraska. To think that my relationship with this incredible nonprofit has come full circle, it really is a dream come true.”

Jerrod Burke and his family have a long history of commitment to wildlife habitat conservation ever since a portion of family farm was homesteaded in 1888. The original Burke Family Homestead is still part of the family farming operation today and is included as part of their 4,500-acre property, composed of agricultural crops and a plethora of federal conservation programs. Burke actively farms with his father and brother, with his only son Logan, becoming more involved in the operation on a yearly basis. “Carrying out the traditions of land stewardship on our farm is an important obligation shared by the whole family,” he added.

The Burke family was chosen as a recipient of the Nebraska Pheasants Forever 3 Million Acre Habitat Award for their contributions to conservation efforts in their local community. Rounding out a personal obligation to the environment, Burke served as a Nebraska Game and Parks Commissioner from 2005-2015, working tirelessly to improve wildlife populations and public access opportunities for sportsmen and women throughout the state.

“Jerrod Burke brings a diverse background to our organization and represents the core of our membership – a devoted upland bird hunter and farmer who is committed to our local mission,” stated Howard K. Vincent, President and CEO of Pheasants Forever and Quail Forever. “I look forward to his ideas and participation with the National Board of Directors as we steer the organization towards greater conservation achievements for pheasants, quail, and other wildlife.”

A teacher at his core, Burke is entering his 31st year as an Industrial Technology instructor at Medicine Valley High School. Additionally, Burke has served his local community as a head football coach, the current network administrator, and is entering his 8th year as an elected member of the Curtis City Council.

Burke and his wife, Doris, have two children – Lauren and Logan – as well as one grandson, Kaidyn. In addition to being an avid upland hunter with a kennel of three Gordon Setters (Abbie, Willie, and Sadie), Burke is also an avid waterfowler, deer hunter, and fisherman in his home state.