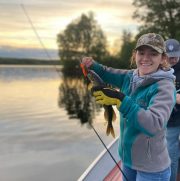 Kelly Mildebrandt hails from Wisconsin and made the transition to the Nebraska Team in October of 2019. Since then, Kelly has impacted 4,265 acres. Her counties include Dawes, Sioux, Box Butte and Sheridan while she is stationed at the Alliance Office. Senior Biologist Mike Klosterman notes, “Kelly has done fantastic in her role as a farm bill biologist in Nebraska. She has taken the new position and made it her own in an office that hasn’t had a dedicated Farm Bill Biologist in the past. Kelly has also integrated seamlessly with her statewide Nebraska PF teammates, as well as with all partners, and has quickly become a highly valued member of the organization. It is an honor to offer her the promotion”. Kelly surpassed goals when the CRP Deadline of 2020 approached as she stepped up to help others in her district.

Addie Piernicky has worked for the Nebraska Team for

one year, starting in August of 2019. Over 8,860 acres have received attention from Addie. Addie’s counties include Lincoln, Keith, Arthur, McPherson, Logan, Thomas, Hooker, and Grant while being stationed in the North Platte Office. Andy Houser, Senior Biologist to Addie states, “In the short amount of time that Addie has been with us she has picked up the job in stride, been very impactful for habitat and wildlife, and utilized her research background in practice. Addie consistently receives compliments from partners and producers who work with her and we are very excited to promote Addie for a job well done”. 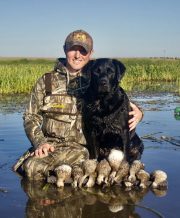 Trent Findley joined the Nebraska Team in September of 2019. 2,082 acres have been impacted by Trent over the last year. Hall, Hamilton, Merrick, Polk, York and Fillmore counties are included in Trent’s area as he is stationed in Grand Island. Trent has a specific focus of grazing management and wetlands working with ACEP along with many other Farm Bill programs.  Senior Biologist Bruce Sprague mentions, “Trent is a very hardworking, dependable employee. Not only did Trent get his CRP workload completed, but he also helped multiple coworkers complete their workload and deadlines as well. We are fortunate to have Trent on the Nebraska PF Team and we look forward to watching him continue to grow professionally”.

Farm Bill Wildlife Biologists work in joint capacity with partners to work one-on-one with landowners in Nebraska to help enroll in conservation programs through federal, state, and local programs.  These positions are part of a successful partnership with Pheasants Forever Inc., the Nebraska Game and Parks Commission, the Natural Resources Conservation Service, and the Rainwater Basin Joint Venture helping the team impact over 6 million acres since inception.