If you have been following our social media pages for a while you may recall a few experiences I have shared highlighting the first times I took my very young son turkey hunting.  As a hunter and involved in R3 (recruit, retain, reactivate), I have a passion to learn, mentor, and share stories to help inspire others.  Unfortunately, the stories
generally consist of what we should have done vs. what we did do. As you’ll learn, most of us aren’t “experts” and it’s okay to learn as you go.  It is all about growing our selves no matter how you do it.

To recap the last two years, we started out with a Lil Banshee Bow and BB Gun to “see how close we could get”.  My initial objective was simple: teach hunting ethics and habitat, show how to achieve landowner permission, and demonstrate safe tactics. Turns out, the very first time we went, we got really close.  So close, I didn’t know what to do as I wasn’t carrying my shotgun.  My son was able to take a shot with his bow (mainly for practice) and was shaking so much he ended up breaking his arrow. What a memory! A few more outings over a couple of years have highlighted a shotgun shot, more learning, exploring, and spending time together in the outdoors.  I’m proud to say that even the simple things of shutting a vehicle door quietly, noticing and identifying a cardinal song without seeing the bird, turning to hold the shotgun after he crosses a fence to help me through, and setting up decoys without being asked has indicated a level of learning and experience.

anticipated the day for several months. However, life got in the way and we didn’t make it out as early as we’d hoped. He was already impatient with me saying, “Mom, I’ve waited so long.”

April 17th finally offered our first good chance in the woods.  We hit it hard that weekend starting with Friday.  We hunted early in the morning and each evening.  We set up a tom decoy and called while hidden behind tree branches.  We utilized box and slate calls, but quickly realized the birds were responding better to my son’s voice

calls.  Yet, we couldn’t quite draw them in.  We decided to try stalking instead; however, the area we were hunting has a winding creek.  Imagine trying to quietly cross a creek in an oak bottom with thousands of dried leaves to sneak up on turkeys.  Yep, it worked about how you imagined. Then, add another young boy (6 years old) to that scene as he wants to tag along and I don’t have the heart to tell him no.  One morning, put us SOOO CLOSE as they were gobbling just on the other side of the embankment.  Unfortunately, between our six feet, we couldn’t get across the creek and up the side quiet enough and the younger son wouldn’t cross on the log.  Three times that day, we turned around to find turkeys on the wrong side of the creek, exactly where we just had been.  At that moment, I realized why I’m an upland game and not big game hunter. 😊  And unfortunately, my oldest son has inherited my level of patience.  We had fantastic wildlife encounters and I practiced with the camera.  Life is still good. 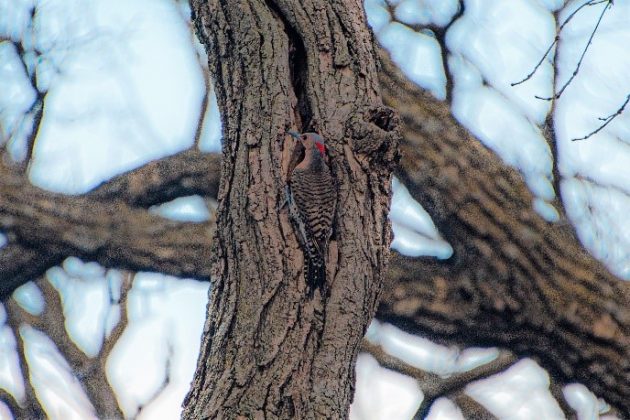 April 18th was an evening to remember.  As the three of us sat patiently identifying and photographing songbirds and woodpeckers, the oldest called in three birds with his voice. They got within 5 yards as we sat behind an eastern red cedar tree.  Unfortunately, my ID is terrible.  The first two were hens for sure,

but the third may have been a jake.  The grass was tall, and the sun was not favorable to see clearly.  I quickly assumed they were all hens and dismissed the thought of harvesting.  Then, when I look at the video, the third bird may have had a very short (1” or less) beard.  On the way home, we talked about how neat the experience was.  I ask, “If any of those were jakes, would you have shot or do you want a tom?”  He replies, “I would have shot. I don’t care if it’s a bearded hen, jake or tom.”  Ugh, I’m quiet as I’m pretty sure I messed that one up.  Another exciting, yet disappointing end to the long day. 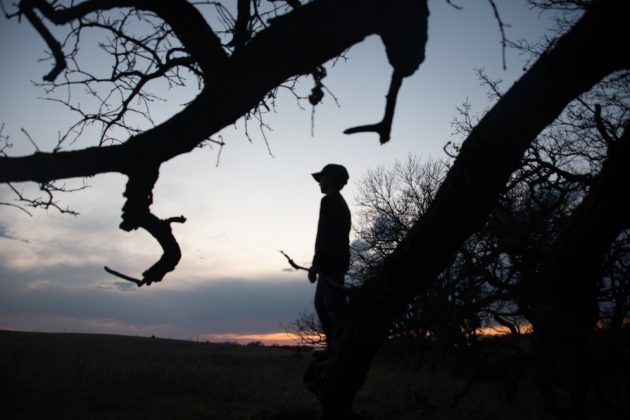 May 1st. Strategy change. We decided to move locations and utilize a blind, which

is again another tactic that tests our patience.  The new location was more open which I hoped would attract the group to our decoy easier.  The move looked promising right away.  The very first morning we had 3 hens and two toms feed on some grubs, dust themselves, and hangout completely unsuspecting.  Unfortunately, they didn’t care about our decoy and calls and wouldn’t come within range.  THEN, with more voice calls my son brought in a large Tom from ½ mile away.  The two original guys were not about to have this tom join their club, but he fought them off.  ALL OF COURSE OUT OF RANGE.  Unfortunately, he too wouldn’t come close to our decoy.  We left disappointed, but thrilled for the experience and photo opportunities.

May 17th:  Strategy change again.  Purchased jake and hen decoys.  Bingo.  Two of the three hens we’ve become to know came in right away offering fantastic photo ops.  They checked out our decoys, called at them, pecked at them, and then went on their way.  The toms strutted, JUST OUTSIDE OF RANGE as they wouldn’t cross a draw.

May 19th:  Strategy change AGAIN.  Set up on the other side of the draw where we have watched them utilize a small flat area as part of their routine.  By this time in the season, both our attitudes are terrible.  We are tired, doubtful, and genuinely annoyed at the birds (and maybe even with each other).  “Mom, this is never going to work. Can we just go?”  “It’s only been 20 minutes.”  Thank goodness the early hen arrives at 6:15am and comes into our decoys.  It’s working again!  She leaves to go do her routine and the second two come in like

clockwork.  No sign of the gobblers.  They’ve been quiet all morning.  At 8:15am, I turn around and the two toms are THERE!  They are pecking at our jake and don’t notice us as we sit on our knees barely concealed at the edge of the embankment.  I worried about our placement as the terrain was a little difficult and I wasn’t confident he’d get a steady shot. Unfortunately, that’s what happened.  A shot and a miss.  Severe disappointment.  Not a good ending to an already exhaustive morning and season.  The moment when the pair of wood ducks landed in the tree, the fact that I added great crested flycatcher to my list or the cardinal that watched over us that morning didn’t matter. We decided to take a break for a few days.

May 26th:  As I put together our packs for the next day, I say “Okay, buddy.  We have five more days with rain in the forecast.  Let’s finish this since we know what to do now.  We’ll move over just a bit so we can be by the tree and you can get a steadier shot. We’ll bring the camo cover this time.”  After a few moments, he finally says, “I don’t want to go.” I quickly respond with, “Huh? There’s only five days left, and we’ve come so far.” I am met with a “Eh,” and a shrug.

Okay, what did I miss?  I know we’re both exhausted, but we’re SO CLOSE!  “Do you want to practice with the shotgun a little more?” “No.”

After a bit of silence, he says, “I don’t want you to kill them.”  Oh man.  I missed the signs.  Mom fail.  Mentor fail.  So many thoughts going through my mind including:  WHAT THE HECK?  We just bought a new grill and I want to try to smoke wild turkey.  We worked SO HARD and finally figured it out. We bought all this stuff.  I want to take photos of the feathers and try making a tail fan mount and other crafty things.  And as a mentor, I want you to have a successful harvest.  I didn’t say any of those things, and I knew one more unsuccessful attempt would be more damaging. 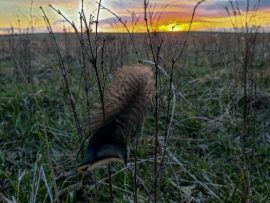 So, five days before the season ended, we put our turkey hunting supplies away.  I think about all the opportunities that this season provided and smile at the group of turkeys and wildlife we had the pleasure of getting to know over the five-week period.  As I overhear him talking to his grandma, he says, “Yeah, I really didn’t want to shoot them.  I just like to watch them.”

Overall, we had a tremendous season.  As I felt bummed and somewhat empty when we didn’t come home with a harvested bird, I’m reminded of the first times I went hunting with mentors several years ago.  The disappointment the mentors felt when I was “unsuccessful” was difficult for me to understand.  In my mind, as a new hunter every outdoor adventure was successful as I learned the sport. I also felt added pressure with these mentors as I didn’t want to further disappoint.  I unknowingly moved into the role of the disappointed mentor when the mentee met his goal.  So, what does it mean to be a mentor? To me, it means, listen for the signs, enjoy every moment, and think about the ways to measure success.  I’m guessing we’ll hit the woods again next season, but if not, we sure made memories that will last a lifetime.  Here’s a few non-harvest successes and highlights.  Enjoy! 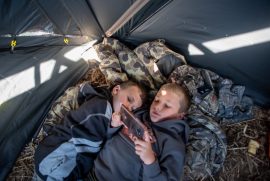 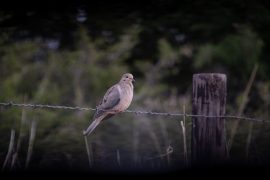 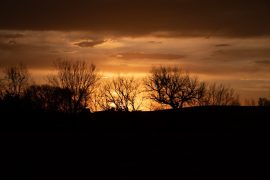 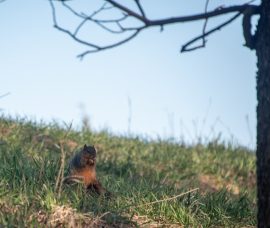 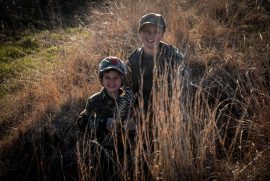 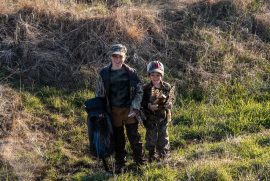